It’s been suggested Turpin Laboratories over-reacted by using the word “buffoons” with respect to the Liberal government’s decision to override four recommendations by the civil service on where to build new schools.

But we’re right. Here’s why.

Many years ago we worked in the education department and accompanied members of cabinet to communities that were getting new schools (many of them P3) either to open the school or update the community on construction progress.

The state of some existing schools, especially outside Halifax, was appalling. There were 38 kids in our graduating class in, uh, the very late 1960s, and that was heaven compared to what we saw circa 2005 in Nova Scotia. In one case the classrooms, hallways, and washrooms all resembled sets from a low-budget dystopian movie. You’d learn more taking classes in the janitor’s room. (If it turns out we paid too much for P3 schools, it was worth it because they got built fast.)

How could this happen? Well, it wasn’t the fault of civil servants. Their recommendations on where and when to build were based on a host of measurable factors, and the intent was to put new schools where they would do the most good at the time and in the future (crazy, eh?) If schools were being left to rot, it was because the political leadership thought it had better ideas than education department bureaucrats.

I don’t know what those ideas were. I suspect they related to winning votes, or enriching “friends of the party” whose nearby land holdings would skyrocket once a new school was announced. So, if you were taking classes in a dump back then, or today, too bad. Your government has votes to gather and friends to please.

Politicians lack the time and expertise to make good decisions about schools. Why? Because the decisions are intricate and far-reaching. That’s why we have a civil service — it’s paid to HAVE the time and the expertise. If the politicians want to dick with whose fish plant gets a subsidy, fine. The damage they can do is limited. No so with schools.

McNeil’s crowd should know this by now, but they don’t. By now they should have put on their grown-up pants and started to govern.

That makes them buffoons.

If you thought the bad old days of Nova Scotia politics were over, read on. The auditor  general has exposed political interference in school construction that will be a burden for a generation.

And then our political buffoons tried to bury the news in a release titled “Fall 2016 Report Released”, with the news hidden in paras 3 and 5 (see below). It is a release  destined to become a teaching tool in journalism classes.

Schools are a huge longterm investment. There are criteria for deciding where to put them. Politics is not one of them.

Clowns to the left, jokers to the right.

When government and a public sector union start talking, the first thing the public does is reach for their cynicism pills.

That’s we because know both sides of the dispute have long ago succumbed to the first law of human organizations: sooner or later, they come to exist only for themselves, not their original purpose.

So the first we thing hear from both sides is the opposite of that. We hear how dedicated they are to the welfare of whatever segment of society they purport to serve. The Nova Scotia Teachers’ Union talks about improving classroom conditions, not boosting dues or fending off other potential unions. The government talks about the same thing, not the need to be re-elected in less than a year.

Both must appear as strong champions of their clients.

So you get the news releases we saw yesterday. (Provided here and here, with helpful annotations.)

But, what if they believed their own rhetoric about serving the public good? Instead of “news” releases, they could issue joint accountability reports to the public. Turpin Labs, always helpful, has developed the first draft of a template designed to help them. Perhaps explaining themselves in writing will clarify their minds. Suggestions are welcome.

The government of Nova Scotia and the Nova Scotia Teachers’ Union regret to inform the public that their latest round of collective bargain talks has failed.

Both parties are disappointed and re-affirm their commitment to good-faith bargaining and the welfare of Nova Scotia. We acknowledge our shared responsibility to parents and students, and apologize for the delay.

To date, we have found common ground in the following areas: (list them here)

Agreement has been reached on these areas: (list them here)

We continue to disagree in these areas: (list them here)

Why we cannot find common ground in these areas. (Government explains why here.)

Why we cannot find common ground in these areas. (Union explains why here.)

Yeah, I know. But, really, I haven’t been smoking anything.

After a year of following the U.S. presidential election, we at Turpin Laboratories have pretty much grown tired of being shocked and indignant. But we’re still not above “piling on” when the media spotlight catches someone in an ethical grey area.

Here you can find a good story by CBC Nova Scotia on the cost to taxpayers of promoting the annual gift of a large fir tree to Boston in 2015.

Here, three days later, you can find the Halifax Examiner’s Tim Bousquet noticing that part of the cost was $25,000 to obtain news coverage of the event from CTV.

No doubt CTV will say that it’s a sponsorship arrangement, not the sale of news coverage; that they are proud to be supporting such an important part of Nova Scotia’s friendship with Boston; that Bousquet is wilfully misinterpreting the contract; that Bousquet is taking it out of context; that CTV would be covering the event in any case and, further, blah, blah, blah.

As noted at the top, at T-Labs, we’re like, whatever.

You can decide for yourself by clicking on the link below. If you’re pressed for time, go straight to Page 7.

Premier Stephen McNeil’s cabinet has stealthily changed the environmental assessment regulations to make it easier to build a waste-to-energy incinerator, a.k.a. burning garbage to generate energy.

Anyone opposed to one of these projects now has less time to react. Proponents of them–now designated for Class 1 environmental assessment, down from Class 2–have to post notice in a local and provincial newspaper within seven days of registering it with Nova Scotia Environment. The public has 30 days to comment after the registration, leaving 23 days if the proponent waits the full seven to publish the notice. That is not enough time to respond to what will inevitably be a complex proposal. In gov-speak, this falls under the heading of “(reducing) unnecessary regulatory burden”. (See below)

Of course, the minister of environment can extend the comment period if she believes “blah, blah, blah”.

The net effect is

that if you don’t like waste-to-energy burners, you’d better read the papers regularly and be prepared to move fast.

If you take comfort in the  list of materials banned from incinerators, just remember you are reading this post because changing regulations is dead easy.

(Disclosure: Turpin Labs has an indirect  interest in this issue with respect to used tires.)

Just understanding the process set out in the revised regulations will take you a couple of days and you’ll probably need a lawyer.

And if you fail to spot the official notice of the project in the Bupkis News-Scimitar, well, good luck to you.

There are plenty of reasons for opposing waste-to-energy plants, not least of which is that burning things produces greenhouses gases, which produce extraordinary droughts in Southern  Nova Scotia and floods in Cape Breton, among other nasties.

And the rejection of waste-to-energy more than 20 years ago in Halifax was key to the development of Nova Scotia’s celebrated waste management program.

But, hey, that’s what public comment is for. Remember, you’ll have 23 days to file it.

Which makes T-Labs cynical about the way this change was announced: On September 13, NSE sent a letter (below) to “stakeholders” explaining the change. If stakeholders included Nova Scotia media, the government forgot to tell them–there was no media release. Consequently, a Google search turns up only coverage from two trade publications, both of which follow regulatory changes closely by, we imagine, subscribing to the Nova Scotia Royal Gazette (which, if you’re wondering, has neither comics nor crossword).

You can also find the regulation change in Cabinet’s official Order-in-Council 2016-224, which is a public document known mostly to insiders. In the OIC, you’ll find references to a “Report and Recommendation”, which is even more of an insider document. It is typically a tedious read, but it does contain actual information. As of this writing, Cabinet support staff were unable to help Turpin Labs obtain a copy before Tuesday.

For further reading, NSE’s website has an FAQ on environmental assessments. It was last updated on March 31, 2014. 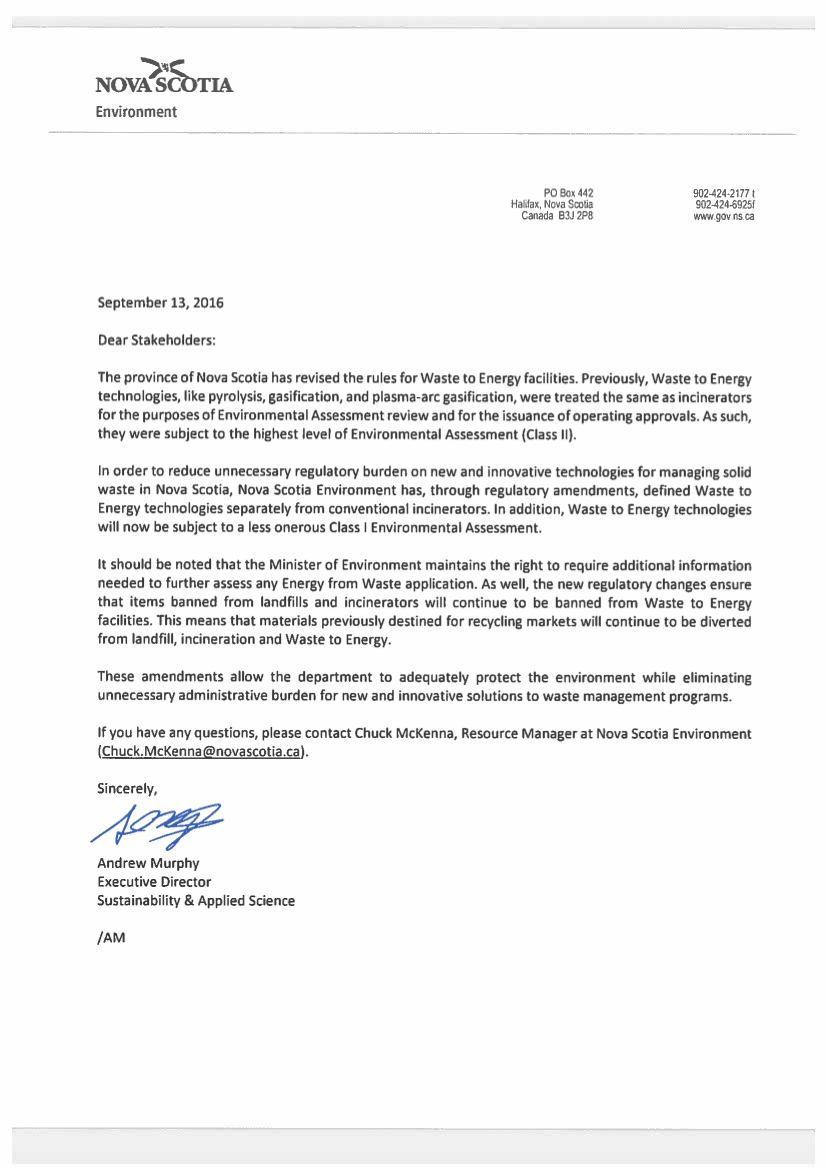